Krishnarao Shankar Pandit’s name occupies an important place in the gharana (Gwalior) of Haddu Khan. He was born in an illustrious family of musicians of Gwalior. He received his early musical tutelage from his father, Shankarrao Pandit, who was a legend in himself, being the disciple of the great Ustad Haddu Khan and Ustad Nathu Khan - the innovators of the Gwalior style and then Nathu Khan’s son Ustad Nissar Hussain Khan. Benefiting from an extensive and intensive training from his father, Krishnarao’s extraordinary regimen included pre dawn practice in the woods to perfect swara, laya and breath control. He was taught wrestling, gymnastics, yoga and swimming to develop stamina, and a range of three octaves. A distinguished and versatile musician, with a rich repertoire, Krishnarao was equally at home in Khayal, Tappa and Tarana. He was considered a master of Layakari. Krishnarao became a well-known singer at an early age. In 1921 he was awarded the title Gayak Shiromani at the All India Congress. For a while, Krishnarao Shankar Pandit served as Court Musician in the court of Madhavrao Scindia of Gwalior. He also opened a music school in Gwalior, Shankar Gandharva Mahavidyalaya, in 1914. He was a respected performer for over thirty years and the various positions of distinction he held also included State Musician of the erstwhile State of Satara (Maharashtra), Emeritus Professor of Madhav Music College, Gwalior and Producer Emeritus All India Radio and Doordarshan. For his immense contribution to the world of classical music, he received numerous awards including the Padma Bhushan in 1973 and the Tansen award in 1980. His disciples included Laxman Krishnarao Pandit (son), Prof. Sharadchandra Arolkar, Balasaheb Poochwale, Meeta Pandit (granddaughter). He evolved an easy and independent notation system in 1914 and also published several books and articles in different journals & magazines. Krishna Rao Shankar Pandit breathed his last on 22nd August, 1989 at Gwalior. 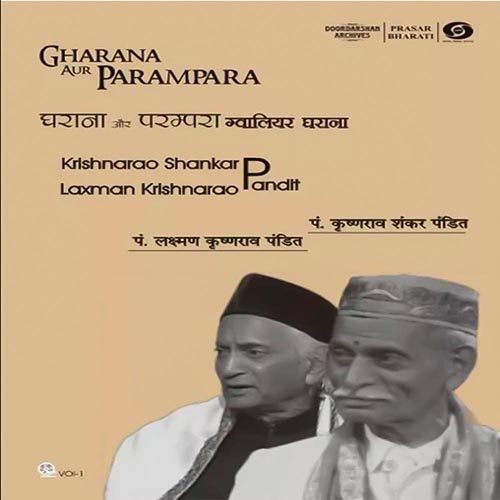