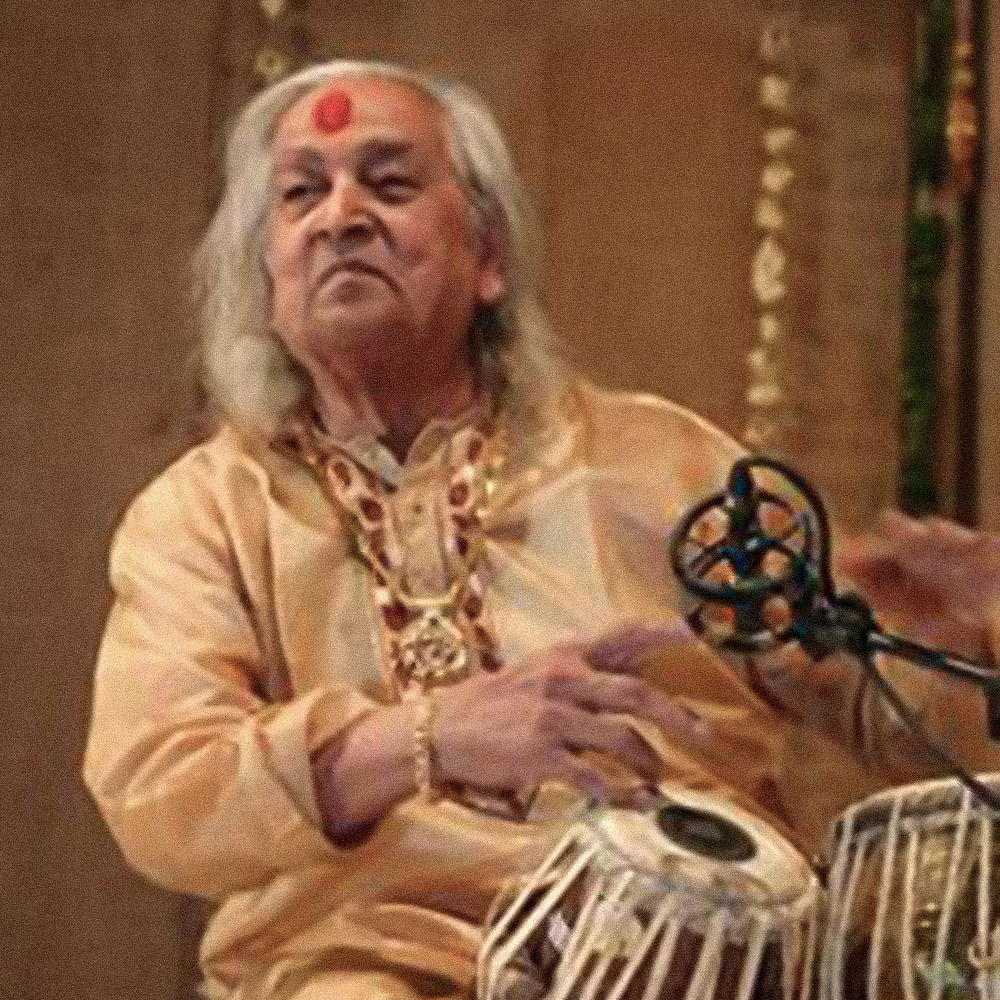 Pandit Kishan Maharaj was an Indian tabla player who belonged to the Benares gharana of Hindustani classical music. Kishan Maharaj was born in Kabir Chaura, Benaras into a family of professional musicians. He was initially trained in classical music by his father, Hari Maharaj. After his father's death, his training was taken over by his uncle, Kanthe Maharaj, a disciple of Baldeo Sahai of the Benares gharana. Kishan Maharaj, by the time he was eleven, he began performing in concerts. Within a few years, Kishan Maharaj was sharing the stage with stalwarts like Faiyaz Khan, Omkarnath Thakur, Bade Ghulam Ali Khan, Bhimsen Joshi, Vasant Rai, Ravi Shankar, Ali Akbar Khan, Vilayat Khan,and many others. Maharaj had the ability to play cross-rhythms and produce complex calculations, particularly in tihai patterns. Known as an excellent accompanist, Maharaj was extremely versatile and capable of playing with any accompaniment, be it with the Sitar, Sarod, Dhrupad, Dhamar or even dance. Maharaj gave a number of solo concerts during his career and also gave Sangat to some great dancers like Sri Shambhu Maharaj, Sitara Devi, Natraj Gopi Krishna, and Birju Maharaj. Among all his compositions, his ˜Tala Vadya Kacheri with the Mridangam Vidwan, Palghat Raghu stood out. Maharaj extensively toured and participated in several prestigious events across the world, including the Edinburgh festival and the Commonwealth Arts festival in the United Kingdom in 1965. Maharaj won the Padma Shri in 1973 and the Padma Vibhushan in 2002. Kishan Maharaj died on May 4, 2008 at Khajuri near Varanasi at the age of 84. Maharaj's disciples include Pandit Nandan Mehta, Sukhvinder Singh Namdhari, Kumar Bose, Vineet Vyas (Toronto), Sandeep Das and Balkrishna Iyer, Shubh Maharaj, Pandit Pooran Maharaj (son), Anand "Maharaj" Lahiri, Arvind Kumar "Azad".