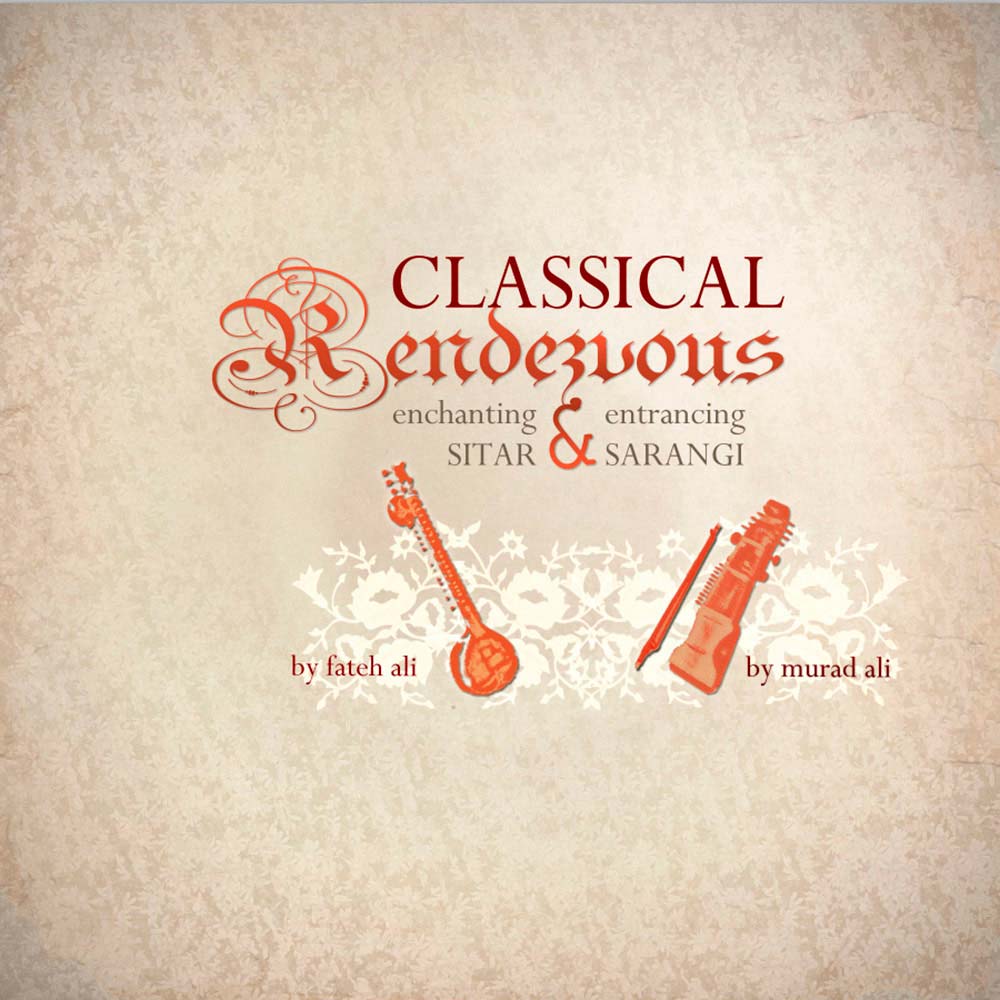 Both Sitar & Sarangi are such mesmerising instruments that one cannot help but immerse in their music and partake in the ensuing ecstatic ambiance. And this is what happens when you listen to Classical Rendezvous, an entrancing combination of Sitar & Sarangi on two different albums, packed in one classic masterpiece. This beautiful collection is a dream come true for the admirable duo Murad & Fateh Ali, for it is the first album which has solo presentations by both of them. On the top of it, they have played purely in traditional style of Indian Classical Music, thus making this a masterpiece for music connoisseurs. In their words, "It has been our constant endeavour in this album to keep the purity of the Ragas and compositions the way we had originally learnt from our Gurus." This is what makes Classical Rendezvous closer to their hearts and strike a chord of the listeners' hearts. The enthralling album of Fateh Ali features three different ragas: Raga Jhinjhoti, a late evening raga belonging to Khammaj family of ragas, Raga Abhogi, a raga of the night belonging to the Kafi That, and Raga Mishr Khammaj Thumri, a light raga with influences from many other known ragas. In the last track you would come across the spellbinding rendition of 'Dekho Dekho Ri Aise Na Dekho'. With this culminates the communion with Sitar, which would keep resonating for quite long..This culmination heralds the beginning of exquisite renditions on Sarangi by Murad Ali. Album by Murad Ali also features three sublime ragas: Raga Bageshree, Raga Purvi, and Raga Mishr Pilu. Raga Bageshree, a late evening raga based on shringar ras, is played in a versatile way by Murad Ali - Traditional Bada Khayal - 'Kaun Gat Bhayi', a Madhya (Medium) Lay (tempo) Bandish - 'Aye Ri Aye Main Kaise Ghar Jaaun', and a Drut Bandish - 'Apni Garaj Pakad lini Baiyaan Mori' which is a very popular Bandish in the world of Indian Classical Music. The next Raga Purvi belongs to Purvi Thaat, in this track as 'Peer Puran Param Paayo', played in a very traditional Saadra in Jhaptaal. The last one is Raga Mishr Pilu, most commonly used for semi-classical and light music, here featuring 'Mori Toot Gayi hai Aas Re', originally sung by the legendary ghazal singer Late Begum Akhtar ji.